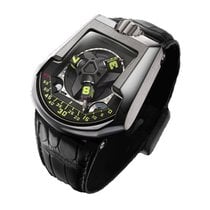 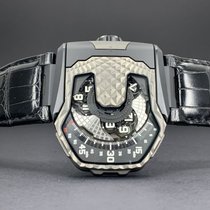 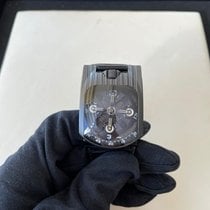 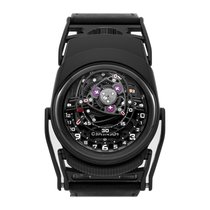 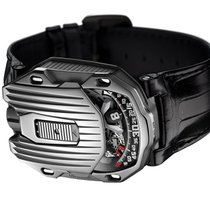 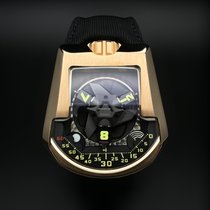 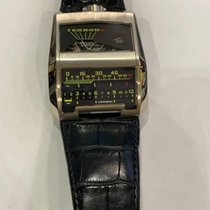 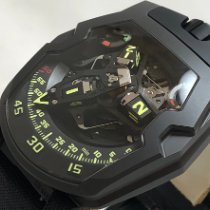 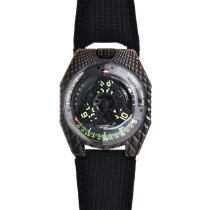 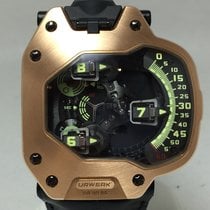 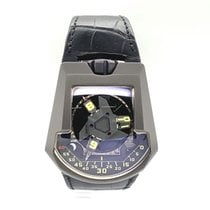 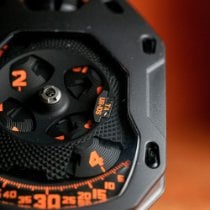 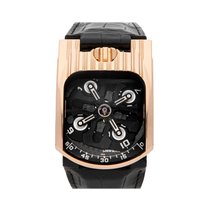 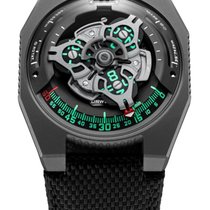 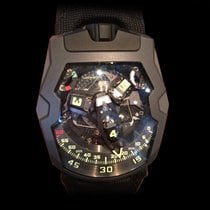 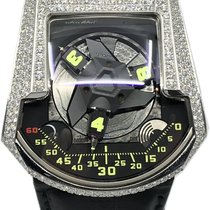 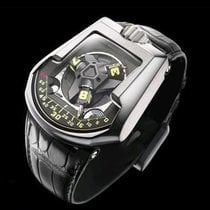 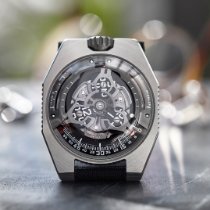 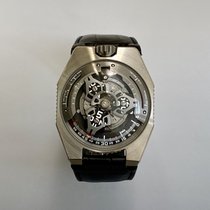 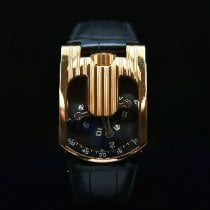 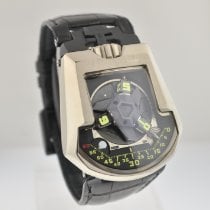 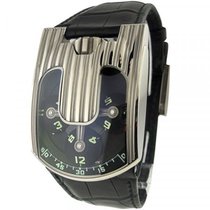 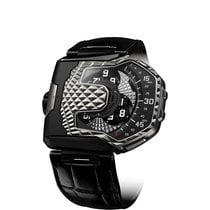 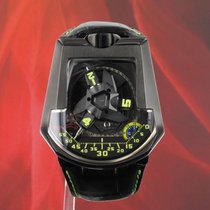 15
UK
Save this search

Urwerk: High-Tech Watches of the Future

Urwerk's visionary creations capture the imagination with their unique technology and design. Each watch comes from the minds of the company's founders. Top models include the AMC, which combines an atomic clock with a mechanical wristwatch.

This page contains information about:

The current Urwerk catalog consists of the collections UR-Satellite, UR-Chronometry, UR-Special Projects, and Historical Pieces. One of the brand's most famous creations is 2005's Opus 5 developed together with Harry Winston. This model boasts an astounding 122-hour power reserve and features the world's first service indicator.

The UR-202 also grabbed headlines as the first watch with a winding system regulated by fluid dynamics. What's more, this timepiece comes with a patented revolving satellite display. Here, the hours appear on cube "satellites" at the end of three prongs. Each cube bears four digits for a total of 12 numerals.

One of this high-tech manufacturer's latest projects is the Urwerk AMC. The AMC is the first "master-slave" wristwatch, meaning it combines a traditional mechanical movement with the technology of an atomic clock. The atomic clock functions as the "master," indicating the time and monitoring the entire mechanical system.

Among Urwerk's celebrity fans is none other than actor Robert Downey Jr., who once owned a UR-105 Raging Gold. The Hollywood star auctioned off his watch in Urwerk's online store in June 2021 and later donated the proceeds to a charity.

Reasons to Buy an Urwerk Watch

Prices at a Glance: Urwerk Watches

How much does an Urwerk watch cost?

The UR-Satellite collection epitomizes Urwerk's unique style. Its name comes from the watches' distinctive satellite time displays – a feature that earned the manufacturer plenty of attention when it debuted in 2003. At first glance, this display can seem quite confusing. However, upon closer inspection, it's actually quite simple to tell the time.

The minutes sit on a semicircular scale on the bottom of the dial. Most models have three satellite arms, though some come with four. The arms are positioned so that only one arm is pointing to the minute scale at any given time, with the next arm taking over after 60 minutes. The hours appear on rotating disc or cube "satellites" positioned at the end of each arm. The number of numerals per satellite depends on the number of arms. For example, watches with three arms have four digits per dial: 1, 4, 7, and 10 on the first; 2, 5, 8, and 11 on the second; and 3, 6, 9, and 12 on the third. Once one satellite has finished its turn, it moves to the next position so the next satellite can take over.

UR-105: Inspired by Suits of Armor

One of the collection's most iconic models is the UR-105 CT. Its 53 x 39.5-mm case is a combination of titanium and stainless steel and takes its inspiration from the breastplate on a suit of armor. A small slider enables the wearer to flip up the center section, revealing the in-house caliber UR 5.03 with four satellite arms beneath the sapphire crystal. When closed, you can only see the minute scale and the current satellite hour hand.

Other defining features include a large crown at 12 o'clock and twin turbines on the back that regulate the winding rotor's speed. A small lever lets you choose whether the rotor winds quickly and efficiently, at normal speed, or not at all.

Urwerk offers several iterations of the UR-105 CT, including a bronze edition and the black-coated UR-105 CT Kryptonite. Prices vary by model and fall between 58,000 and 66,000 USD. The limited-edition UR-105 Clockwork Orange pairs a black case and movement with bright orange numerals. You can purchase this timepiece for roughly 52,500 USD.

The Historical Pieces collection is home to Urwerk models from the recent past. One example is the UR-103, the predecessor to the UR-105. The UR-103 is slightly smaller than its successor, measuring in at 50 x 36 mm. It is also less angular and features straighter lines. However, the two models still bear a striking resemblance. Both feature a large crown at 12 o'clock, a semi-circular minute scale on the bottom of their dials, and four satellite arms. While the UR-103 uses discs for the hours, the UR-105 uses cubes.

On the back, you'll find a power reserve indicator, a small seconds, and a 15-minute display. Here, Urwerk has also placed a small screw for fine-tuning the watch's accuracy.

The UR-103 is available in rose or white gold, polished stainless steel, or stainless steel coated with AlTiN (aluminum titanium nitride). The AlTiN edition, also known as the "Tarantula," costs around 34,500 USD. The same watch in gold demands several thousand dollars more.

Urwerk is always experimenting with new ways to tell the time. Some of the results of this experimentation end up in the UR-Special Projects, including the UR-111C and UR-CC1. Instead of hands, these watches feature rollers with markers for the time. You can view these rollers through openings in the case. As the minute roller turns, its marker appears to travel horizontally across the display. The case designs are as unconventional and futuristic as the rest of the watch. With their angular, industrial aesthetic, the UR-111C and UR-CC1 would look right at home in a sci-fi flick.

The UR-1001 also belongs to the UR-Special Projects collection and is one of the manufacturer's most complicated timepieces. Its massive 106 x 62-mm case houses a three-armed satellite time display with a retrograde minute hand, as well as a calendar with a three-pronged satellite for the months and a semicircular scale for the date. Urwerk also equips the UR-1001's dial with day/night and power reserve indicators.

On the case back, there's a hatch, beneath which you'll find additional functions, including a 100 and 1,000-year display. This is also the location of the so-called "oil change" indicator that lets you know when the watch needs to be serviced.

The UR-Chronometry collection is all about precision. For example, the EMC not only allows you to adjust the movement's precision with a fine-tuning screw, but it can also measure and display deviations from the reference time. This is made possible by a specially developed balance with a sensor that registers and interprets the oscillation system's movement. You can initiate the three-second measurement process by pressing a push-piece on the left side of the case. A fold-out crank on the case's right-hand side provides this system with the necessary energy. Once the sensor has collected the data, it displays your watch's precision on a large scale on the lower left third of the dial.

Introduced in 2020, the EMC Time Hunter takes things one step further. Its sensor is capable of measuring and displaying the movement's precision and balance amplitude simultaneously, enabling you to regulate the caliber with even greater accuracy.

Both watches measure 51 x 43 mm, and the angular octagonal crown at 6 o'clock adds a particularly technical touch. Urwerk offers the EMC in brushed stainless steel or black-coated titanium. Prices depend on the exact edition and fall between 73,000 and 77,000 USD. The EMC Time Hunter comes in your choice of stainless steel, titanium, or ceramic. This rare timepiece has an official list price of 115,000 CHF (approx. 125,000 USD) before taxes.

The AMC debuted in 2018 and is a modern interpretation of Abraham Louis Breguet's "Pendule Sympathique" from over 220 years ago. Breguet's system featured an especially precise pendulum clock that could wind and set its companion pocket watch when the watch was mounted on the clock.

Urwerk has translated this "master/slave" principle into a completely mechanical wristwatch that is set, regulated, and wound by a mobile atomic clock. The atomic clock sits in a solid aluminum case weighing 77 lbs (35 kg). You can easily remove the wristwatch from its band, so you can fix it to the atomic clock and have it synchronized to the reference time – 100% mechanically! At the same time, the atomic clock detects any deviations and corrects them. If the watch needs to be wound, the "master" clock makes sure this is done as well.

The Urwerk AMC is an extremely rare masterpiece, of which only a handful of copies are produced each year. As a result, prices for this high-precision timekeeper far surpass the 2 million USD mark.

Urwerk is the brainchild of Felix Baumgartner and Martin Frei. The two men first met at a party in 1995, where they quickly realized that they shared a passion for timekeeping. One thing led to another, and the duo ended up founding their business only two years later. Their goal was to express their unique vision of time. The company's name, "Urwerk," combines the ancient Sumerian city of "Ur," where people were already using sundials to tell the time some 6,000 years ago, and the German word "Werk," which means "factory," "achievement," "handiwork," "creation," and "mechanism."

Baumgartner comes from a watchmaking family and learned all there is to know about the craft in his father's workshop. At Urwerk, he is the master watchmaker behind many of the company's technological achievements and developments. Martin Frei, on the other hand, is responsible for the brand's extraordinarily shaped cases. Before founding Urwerk, he earned a Bachelor of Arts from Lucerne School of Art and Design in Lucerne, Switzerland.

Urwerk produces their watches in two workshops: one in Geneva and the other in Zürich. What's more, nearly all of their components are manufactured in-house.