Back in 1933 Heuer introduced the ‘Autavia’ for the first time in the shape of a dashboard timer. At the time it was intended for use in both the automotive and aviation industry. This is also from where the name comes from. Autavia is an abbreviation of the words AUTomobile and AVIAtion. It wasn’t until 1962 that the Autavia was brought to the market in the shape of a chronograph wristwatch and probably nobody guessed that 50 years later it would become one of the most desired collectors items in the world of vintage timepieces.

Quite early Heuer became one of the leading manufacturers of stopwatches and chronograph watches which were popular amongst race car drivers for their functionality. When the Autavia Chronograph was released in 1962 it featured the manual wound Valjoux 72 or 92 movement depending on the layout. Where the Valjoux 72 features a 3 subdial layout, the Valjoux 92 only has 2. Both movements are manual wound and were quite popular back in the days. You would find them in many different watch brands. 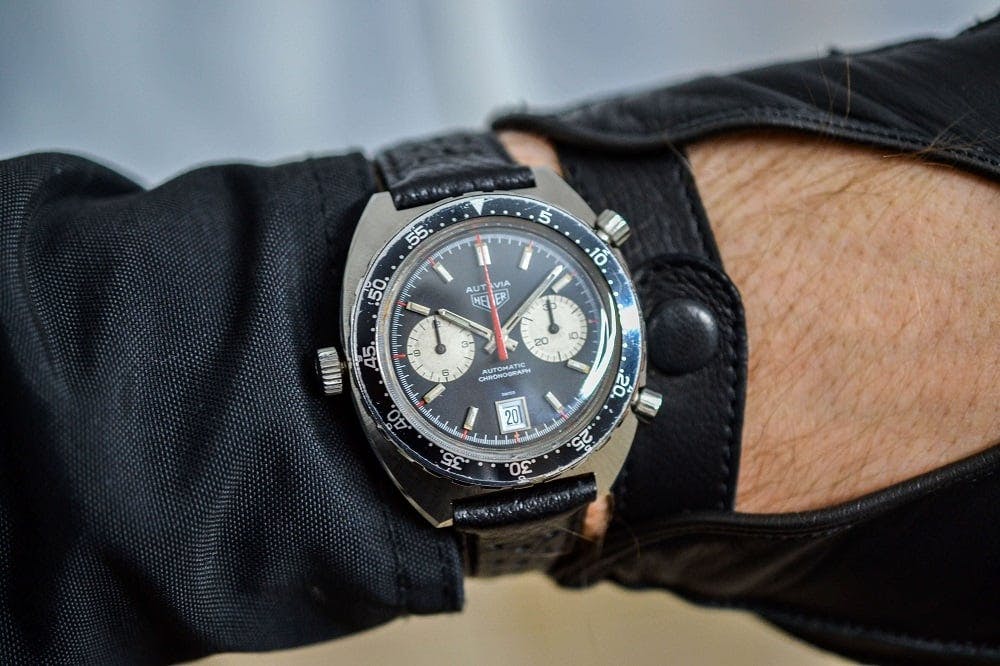 Through the years many Autavia models have made it across the counter to their new owners in a bunch of variations. This might be one of the factors which makes the Autavia so interesting for watch enthusiasts. Starting off as a manual wound chronograph with plexi crystal all the way to full automatic watches with mineral glass crystal. We’ll try to name some of the best known variations from which you will be able to narrow it down even further while looking into this matter. There is just too much info to capture it all in a short article. 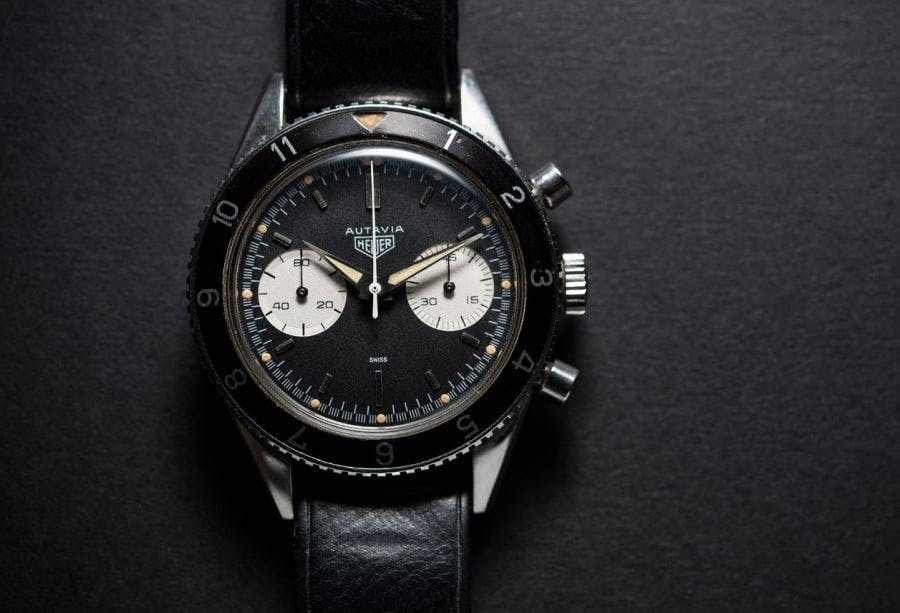 Heuer produced the first Autavia as a manual wound chronograph with a screw in caseback with a black dial and white subdials and dauphine hands. The watch measured 38.3mm in diameter and 47.6mm from lug to lug with a strap size of 19 mm.  In the late 60’s the case was slightly enlarged to 38.8mm and 47.9mm where the thickness only gained 0.1mm, from 13.4 to 13.5mm. Slowly the dauphin hands changed into more modern stick hands.

From there the case was enlarged to 40mm in diameter and 48 from lug to lug. Also the strap size went up to 20mm. Whilst still powered by manual wound movements the caseback changed from screw-back to snap-back. These models are also known as the Compressor. With this series the first silver dials with black subdials were introduced. They have been produced between ’68 and ’71. In the late 60’s the Autavia GMT was sold in both the larger screw caseback as the compressor snap caseback. All featured a 3 subdial chronograph.

Starting in ’69 the first automatic Autavia watches made it to the market. And once again they came with an enlarged case measuring 42.3mm. Something that was quite large at that time already. Also new is the typical 70’s design of this case. Following some years the watches were also available with manual movements again but after 1974 they only came to the market with automatic movements. 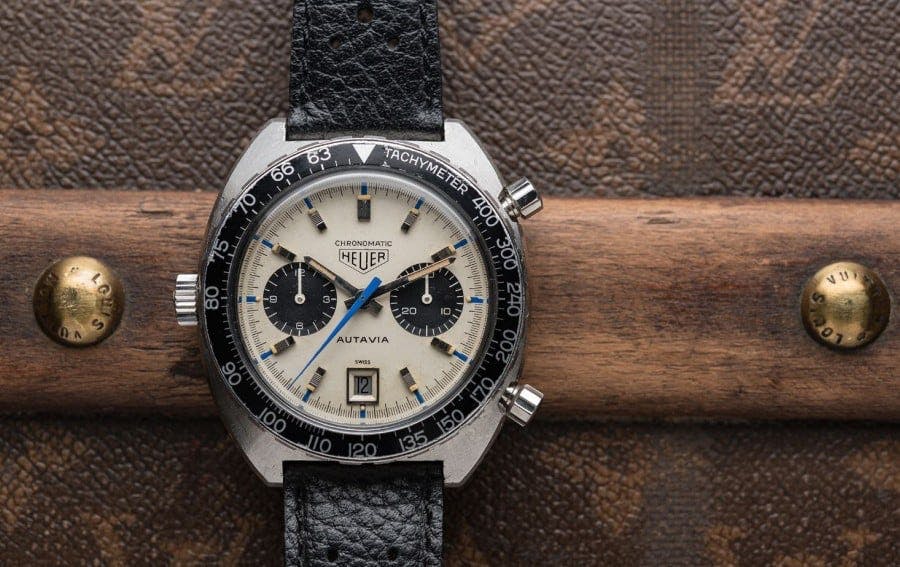 As from the first Autavia they came with a black dial and white subdials which is a combination that has always been in the collection. Apart from that there are also some models which feature the inverted look having black subdials over a white or silver dial. Also black, grey or a combination of those are produced but not as many. The rarest of them all is the Caliber 15 Autavia which features an asymmetrical dial on which the left subdial is pushed upwards to the 10 o’clock position.

On the Heuer Autavia many bezel variations can be found making it useful for many different situations. There were the 12 hour bezel which could be used as a second time zone. The 60 minute bezel which could function for time marking a specific time period and a specific Hours and minutes bezel combining both. The typical red and blue GMT bezel which combines with a 24 hour hand to indicate a second time zone. Decompression bezel for specific diving use. And another one is the tachymeter bezel which is mostly linked with auto sports as it helps calculating units per time period like average speed.

Searching for an Autavia you will find the name ‘Viceroy’. This was a special model that was available for 88 Dollars at the time. Quite the bargain when you realise that the regular model would set you back 200 Dollars. And all you had to do was send in a the end flap of a package of Viceroy cigarettes. For this specific model they changed the bezel to a tachymeter scale. After the promotion ended Heuer still produced this model.

Where the original price tag on the Autavia was around 100 USD when they first came to the market, a lot has changed. As with many popular vintage watches prices increase when demand is high and models get rare. Although the realised prices during auctions aren’t as exotic as with certain chronographs from other brands, first execution Heuer watches have recently been hammered of at prices of up to 6 figures. So quite the investment if you think of that. 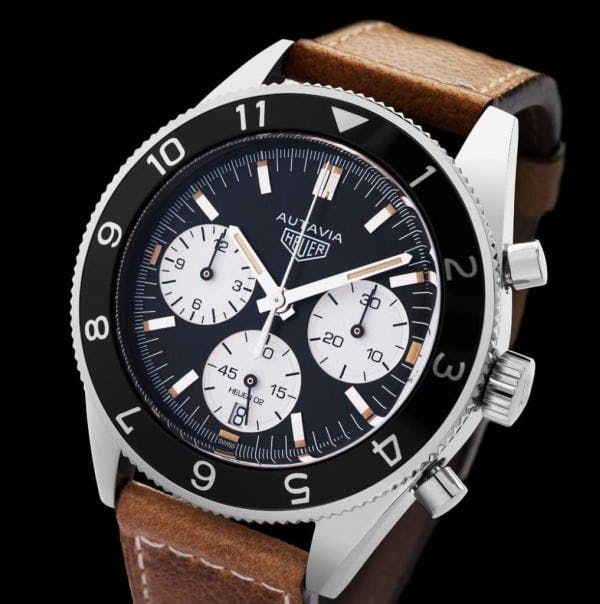 Where the last Heuer Autavia were produced around 1985, many enthusiasts were hoping to see something happening in 2012 for the 50th anniversary. Sadly for them it took another 5 years before TAG Heuer came up with a re-edition of this iconic watch. What is interesting about it is the way they did it. TAG Heuer set up the “Autavia Cup”, an online poll to consult with the brands fanbase giving them the opportunity to choose their favourite version for the re-edition. Over 50.000 votes were made over two rounds choosing the 1966 Autavia “Rindt” being the most popular model. Jochen Rindt was a celebrated F1 champion that wore this model almost permanent. During Baselworld 2017 the re-edition was finally launched.

I worked in real estate for 15 years. Over the last few years, I've turned my passion for watches and photography into a career. My interest in watches dates back …