Looking to sell a watch? Select how:

Over 1,500 successful private sellers each month.

Become a Chrono24 dealer
Free Appraisal
What is your watch worth?
Home Magazine Lifestyle Make a Big Statement: 4 Watches for Larger Wrists 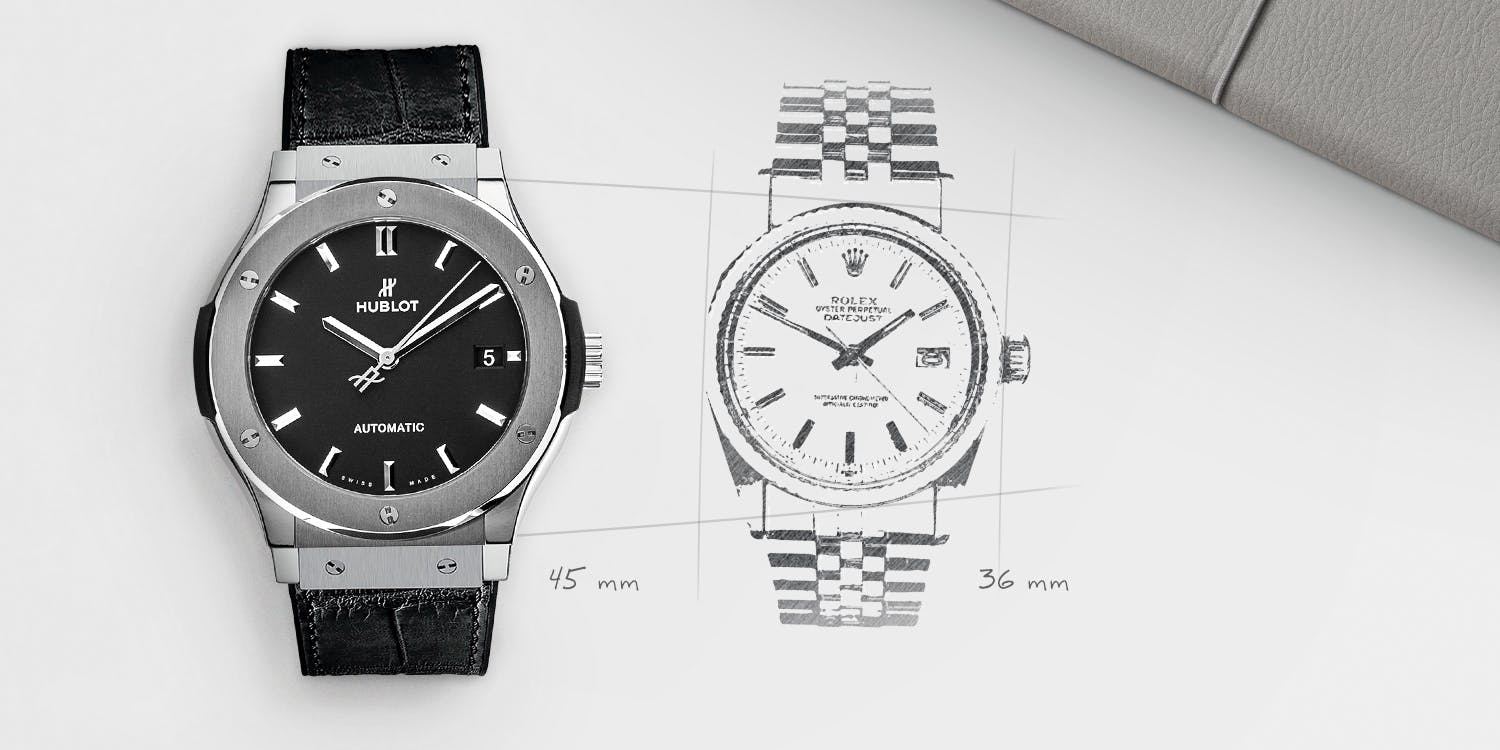 What’s the first thing you think of when it comes to big watches? For me, it’s Arnold Schwarzenegger and his Audemars Piguet Royal Oak Offshore. However, the trend toward larger timepieces is much older than that. Purists might not want to admit it, but watches are also subject to the ever-evolving world of fashion. This was on full display at this year’s two most important industry trade fairs: SIHH and Baselworld 2019. Along with vintage-style models like the Breitling Navitimer and the ongoing bronze trend, it’s clear that cases are shrinking once again – something that’s actually been going on for a few years now. But just as there’s a yin to every yang, there’s a counter-trend to every trend. In this article, I want to highlight a few watches that go beyond the 41-mm mark and are pushing back against this wave of small watches, just as the Terminator battled against Skynet (that’s the last Terminator reference, I promise). On that note, let’s get down to business: What oversized watches are the greatest nemeses of the industry’s downsizing trend?

Okay, okay, the transition from the Terminator toA. Lange und Söhne Zeitwerk was never going to be a smooth one. This timepiece’s size has little to do with an image of strength, masculinity, and macho other attributes. Instead, its case is large for practical reasons. The movement needs lots of space. More specifically, 44.2 mm of it. Despite this, the Zeitwerk still manages to be elegant with just the right touch of playfulness, as it to be expected from this German watchmaker. And when I say playful, I’m not talking about the design. I’m talking about functionality.

As the first watch with a jumping digital time display, it turns heads not just with its size but also with its truly unique looks. Models with a decimal minute repeater are even more impressive. These timepieces can relay the time acoustically via a series of chimes. The Zeitwerk’s two hammers sit above its silver dial, allowing the wearer to watch as they strike the gongs within. In this instance, a platinum case and rhodium-plated gold hands complete the look. The Zeitwerk is as extraordinary as its price. You can find the reference 147.025 for around $330,000 on Chrono24. That’s nearly $8,000 for every millimeter of case diameter. Talk about a statement piece! 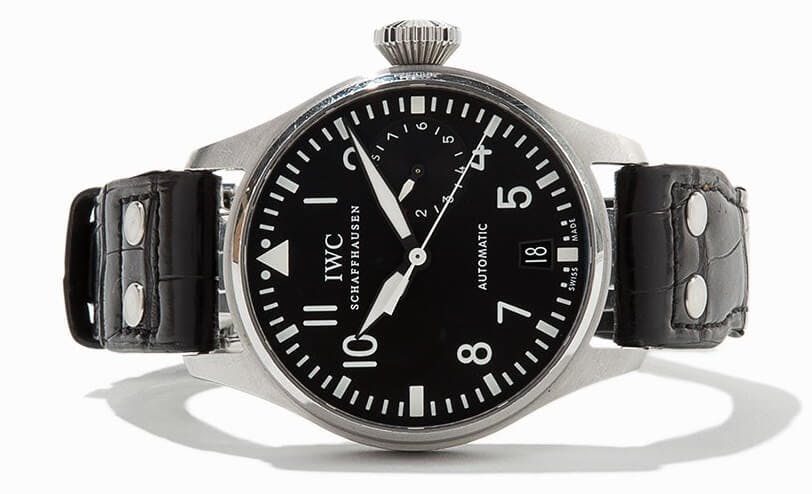 At this point, you might be thinking something like, “What’s with this guy? He’s selected a watch with the word “big” in its name for an article about big watches. That’s supposed to be creative?” While I hear you, the IWC Big Pilot belongs on this list. Let me tell you why: The IWC Big Pilot has been one of the cornerstones of IWC’s catalog since 1940. This pilot’s watch continues to powerfully shape the Swiss brand’s image. The original model featured an impossible-sounding 55-mm case. Current models are around 46 mm in diameter. However, the case isn’t the only thing that’s bigger than usual about this timepiece. Its conical crown grabs your eye as well. This has (or at least had) historical and very pragmatic reasons. Namely, it meant that pilots could operate it without having to take their gloves off.

If you’d prefer a watch with a design as striking as its size, you’ll definitely like the reference IW501005. Only 1,500 copies of this watch exist. More excitingly, its 46-mm bronze case will take on its own unique patina over time. The IWC automatic caliber 52110 powers this timepiece. This movement is based on the IWC caliber 52010 and boasts a 168-hour power reserve. Talk about impressive. But seriously, who in their right mind would let this timepiece sit somewhere other than where it belongs: right at home on your wrist? The combination of a bronze case and calf leather strap more than does justice to the “big” and “heritage” in this watch’s name.

If we were on the search for the “watch with the longest reference number,” this watch would probably take the cake. The ref. 10.9000.9004/96.R921 is a 44-mm timepiece that would look great on the wrist of any basketball player, rapper, or actor. As for whether it bothers Zenith that Audemars Piguet and other companies are ahead of the pack when it comes to this target demographic is anyone’s guess. In any case, there’s no hiding the Zenith Defy El Primero 21 thanks to its massive size. The entire case, including crown and push-pieces, is made of carbon. Only the rubber strap and the clasp are not made of this high-tech material, although they do have that carbon look.

There’s nothing tame about this El Primero’s appearance, and the inside is no less exciting. Many consider the El Primero caliber revolutionary, including yours truly. This movement is renowned for its extraordinary precision. A sapphire crystal case back offers a view of the caliber at work. In the case of the Defy El Primero 21, it’s the new El Primero 9004. With a balance frequency of 360,000 alternations per hour, this movement is operating on an entirely different level from many of its competitors. Its chronograph is accurate to within 1/100th of a second, and the hands glide incredibly smoothly around the skeletonized dial. I could talk about this watch for ages, but really, you just have to see it for yourself! The Zenith El Primero is truly big, both inside and out, and has more than earned its place on this list. 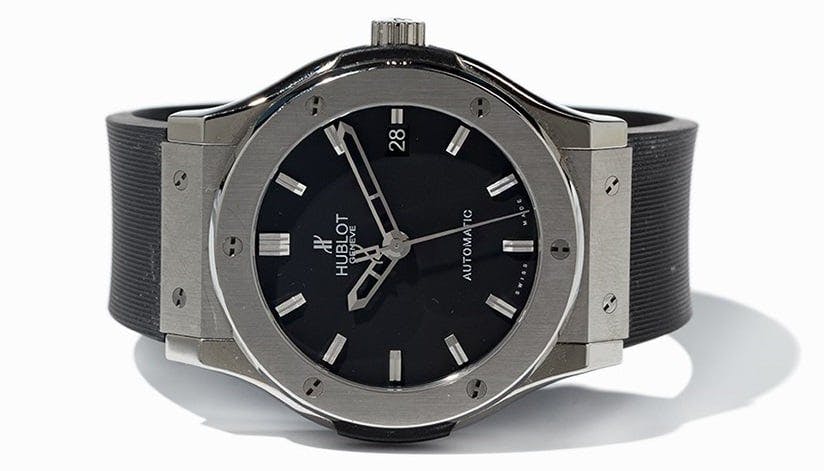 Try to name a brand with more personality than Hublot since Jean-Claude Biver revived the company. It’s hard, isn’t it? Like the El Primero, the Classic Fusion Titanium (ref. 521.NX.1171.LR) is a chronograph. The Hublot caliber 1143 ticks away inside its 45-mm titanium case. While there’s no comparing this movement to the Zenith Defy El Primero, these two watches share similar rubber straps and case shapes. The caliber 1143 has a much lower balance frequency of 28,800 A/h; however, the Hublot surpasses the El Primero in the glamour department (in my opinion). Its round case and six prominent screws are typical of the Classic Fusion. That being said, this is one of Hublot’s most “plain” models. Instead of flashy colors and skeletonized dials, you’ll find a titanium case with polished and brushed finishes that’s a touch less sporty than the watches of the Big Bang collection, for example. And that’s keeping its black dial with two chronograph counters and a date at 6 o’clock in mind. However, with 50 m (164 ft) of water resistance and a crocodile leather strap, the Classic Fusion will have to stay on the sidelines in certain situations.

The oversized trend that kicked into high gear at the start of the 2000s thanks to big Hollywood stars may very well have hit its low point in recent years. But who really wants to run with the herd, anyway? Regardless of what the latest trend demands, some wrists just weren’t made for the classic Datejust sizes of the 1960s and 70s. Owning a big watch doesn’t have to mean you’re trying to send a certain message. The models we just looked at clearly demonstrate that some complications just need more room. Sure, there are those pieces that are more style over substance. However, if the wearer likes the way it looks and feels, who are we to judge?

Richard Mille, Omega, and Grand Seiko: 3 Watches Worth Showing Off

Finding the Right Brand for Your Style

Budget-Friendly Luxury: Our Top 5 Watches Under $2,000

By Pascal Gehrlein
Jan 13, 2020
View all articles
Next article

May 27, 2016 by
Christopher Beccan
View all articles

Editor’s Picks of the Week – Zenith, Hermès and Rolex

The Watches of Team Chrono24: Pascal

What trends, watches, and brands played an important role in 2018?