Discussions about watch purchases often revolve around technical specifications or handsome good looks. The latter always includes the case design and dial, but what about the back? Case backs often seem to be of less importance when it comes to buying a watch, but that doesn’t mean we should ignore them. Case backs vary widely between models and each tells a unique story. Let’s take a closer look at some of the different types and pick out a few case back highlights.

To begin, let’s look at the different varieties available for case backs. What was once no more than a functional access point to the movement for watchmakers has evolved into an art form that has become essential to a watch’s story. Here are some of the most common case back options:

The simplest and most basic option for watches is the minimalist case back. This may refer to a blank case back or one with nothing but the most essential information like the brand name or technical movement specifications.

Another option is the personalized case back. Though it has become significantly less popular due to brands using the case back as a canvas for their own story, personalized case backs can still be very special because they are unique to one individual. Watches are often bought to celebrate a special moment in a person’s life, making the connection very real.

Show-off case backs are those that basically showcase a brand’s craftsmanship by decorating the back of the watch with engraved works of art. High-end brands, in particular, like to use case backs to demonstrate the exceptional skills of their master engravers.

Some special watches use the case back to honor the watch’s history. This option is almost exclusively found in limited-edition watches. A good example is the Omega Speedmaster Apollo 11 50th Anniversary Moonshine Limited Edition, which features a piece of lunar meteorite in its case back. Of course, lunar meteorite is incredibly rare, but more than that, having a piece of the Moon’s surface in your watch is an amazing testament to the Speedmaster’s incredible story. 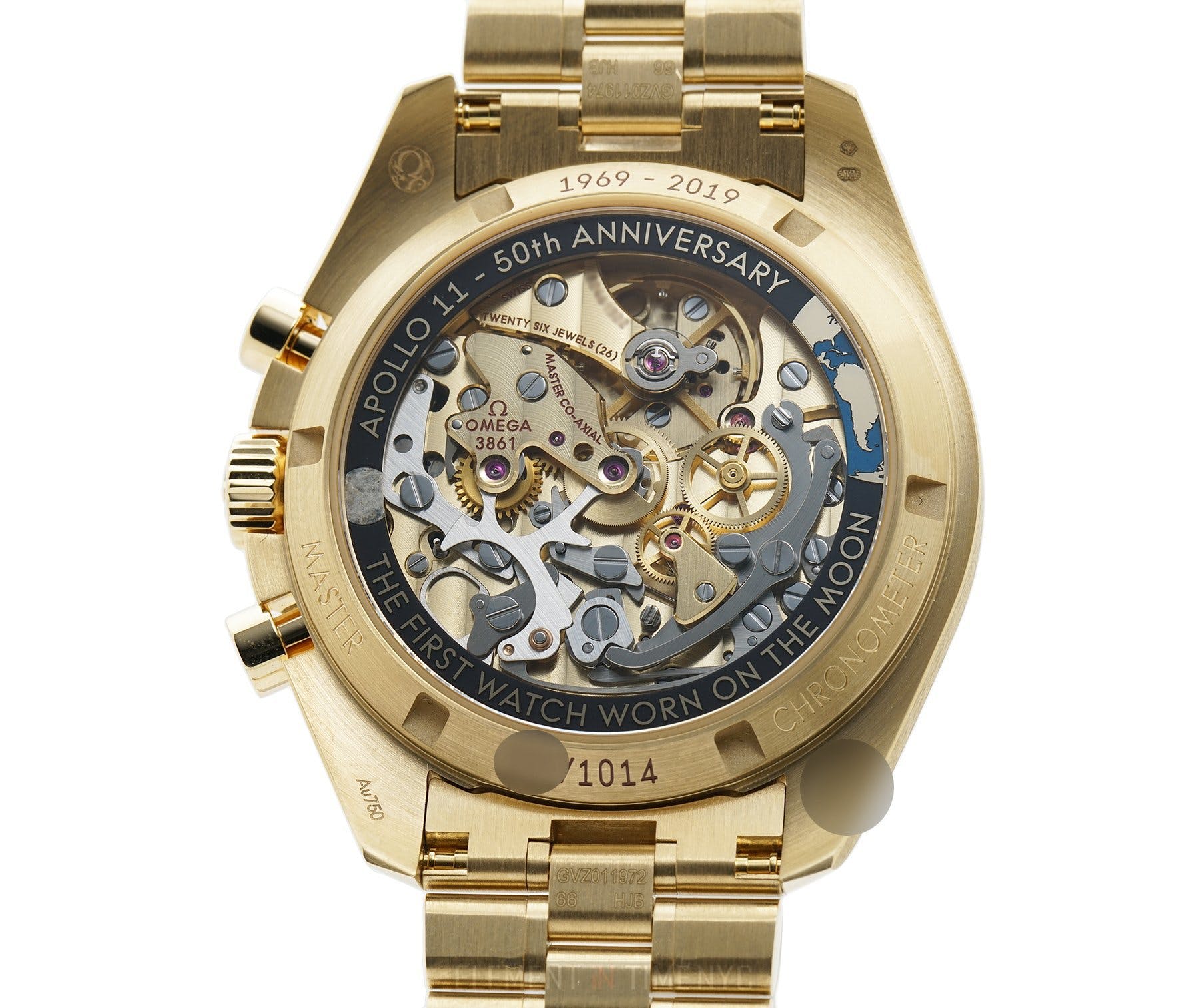 Display case backs are the perfect choice for those who love watch technology. An exhibition case back replaces the solid case material with sapphire crystal, giving you a clear view of the watch’s movement at work. It’s fascinating to witness the heart of the watch ticking away in real time.

The last option is not really a case back per se but rather a second face. This is possibly the most exclusive option because it’s so rare. The most expensive watches on the market sometimes use a double face to incorporate all the watch’s technical complications and make them more visible to the wearer. One of the most famous double-faced watches ever produced is the Patek Philippe Sky Moon Tourbillon, which features a complete display of the night sky on its reverse side – talk about a piece of art for your wrist. 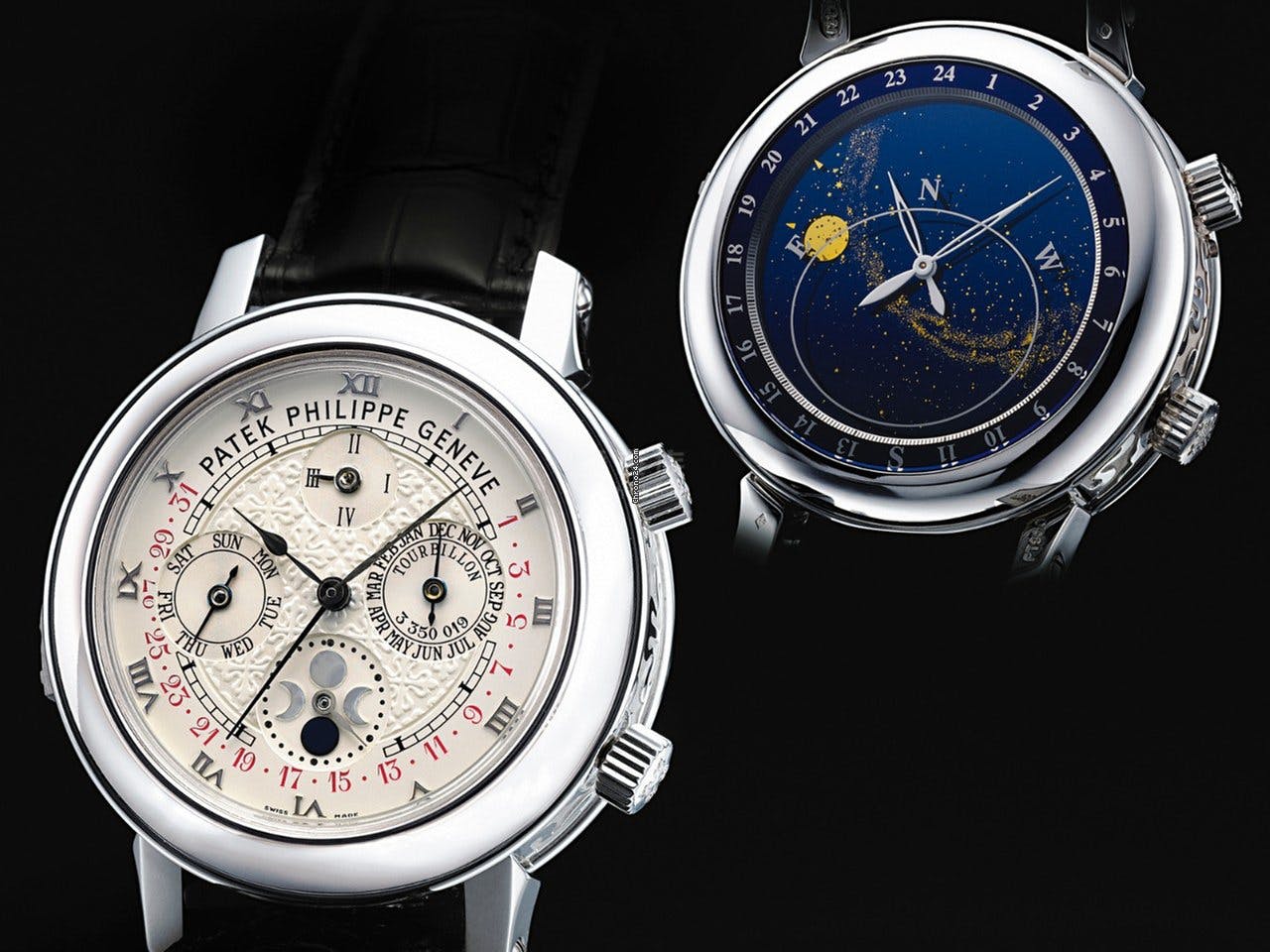 I’ve already mentioned a few watches and their respective case backs, but let’s take a closer look at some of the most unique and iconic case backs to date.

The Omega Speedmaster has been treated to an incredible number of case backs since its introduction in 1957. The earliest variations are not that important here. What matters is the story of the 1969 Moon landing. Ever since, the case back has featured the words, “The first watch worn on the Moon.” No story can top that, making it one of the best case backs to date. 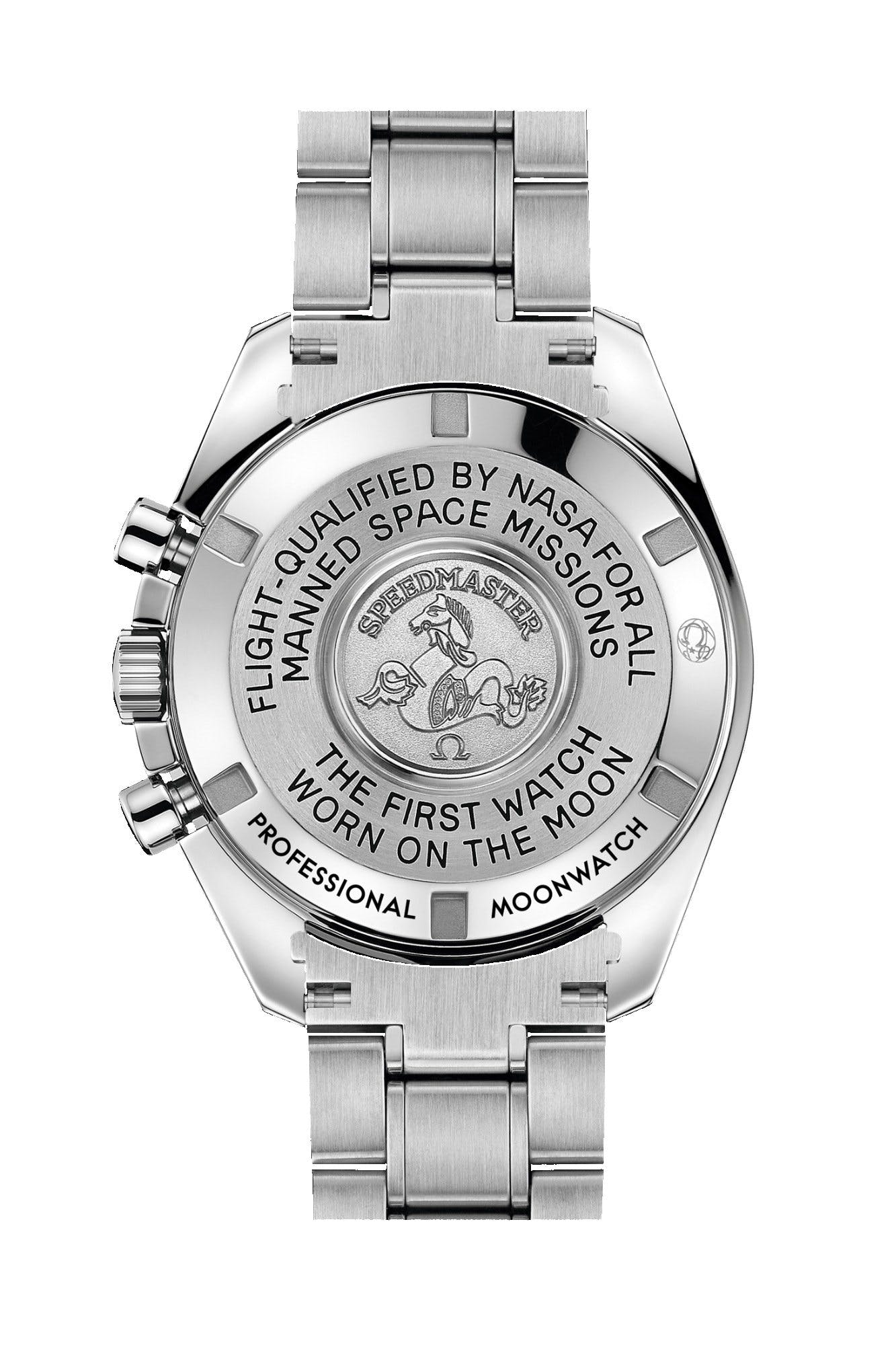 You may have heard of a 1960’s film called The Dirty Dozen. It tells the story of 12 soldiers during World War II. In the watch world, however, the “Dirty Dozen” refers to a group of twelve watches worn by British soldiers during the war. The British Ministry of Defence (MoD) commissioned timepieces from the following manufacturers: Büren, Cyma, Eterna, Grana, Jaeger-LeCoultre, Lemania, Longines, IWC, Omega, Record, Timor, and Vertex. 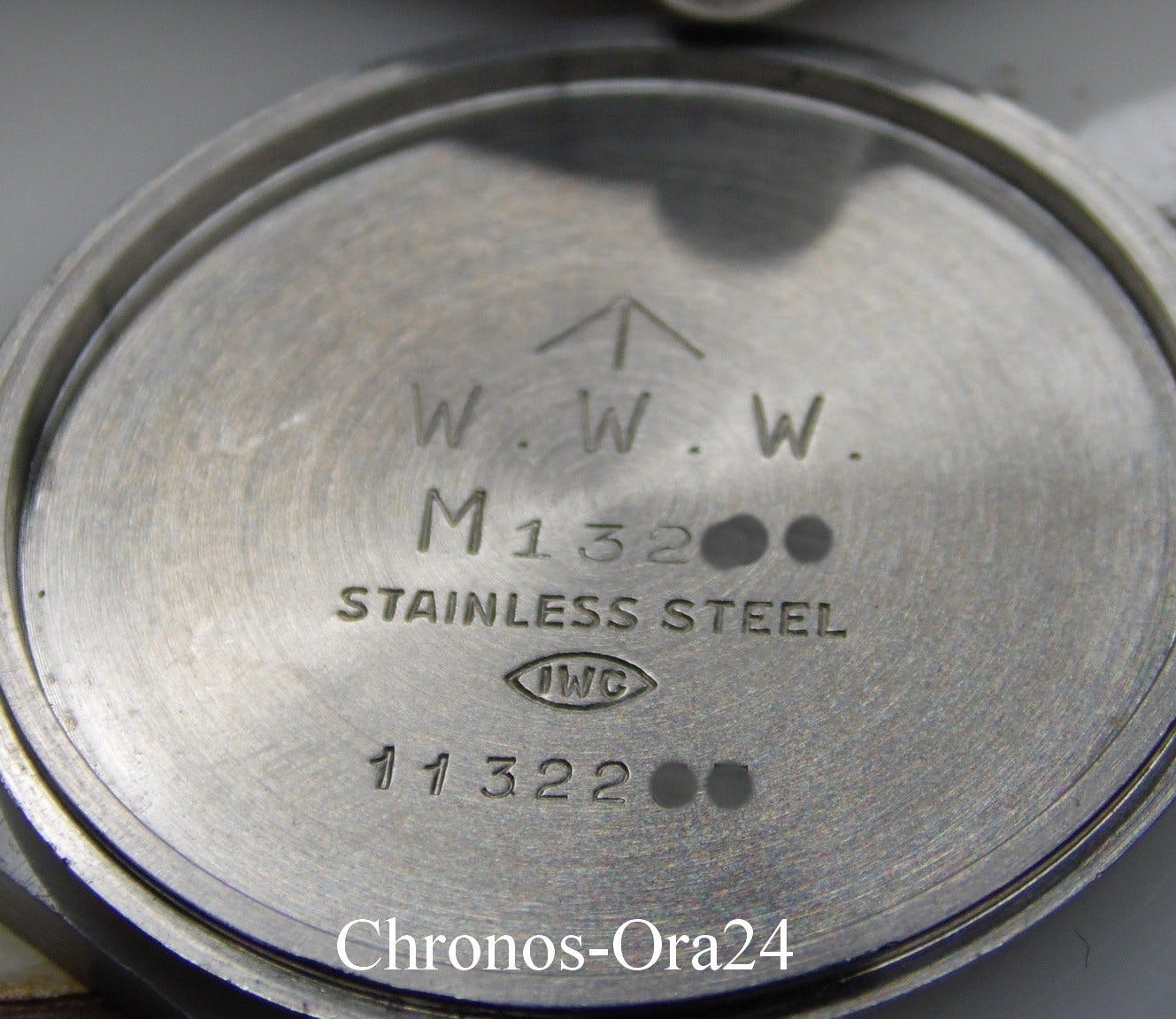 These watches are easy to identify thanks to a specific engraving on their case backs: three W’s which stand for watch, wrist, and waterproof. This engraving identifies the watches as government property and categorizes them as separate from government-issued weaponry. Beneath the three W’s are two more lines of engraved text. The first is a military serial number that starts with a capital letter followed by up to five digits. The second line is a standard civil serial number. The engravings remind us of the British soldiers who fought in WWII and have resulted in some of the most iconic case backs in the watch world.

This limited-edition Aquatimer was released back in 2006, and I think it is a very special watch. IWC and the Cousteau Society have been partners since 2004. The society – named after the world-famous explorer, researcher, and filmmaker Jacques Cousteau – is committed to ocean research and the protection of marine life. As a young boy, I remember spending many Saturday afternoons at home in front of the TV being mesmerized by Cousteau’s films.

Many of the movies featured the Calypso, Cousteau’s research vessel. The Aquatimer Chronograph “Cousteau Divers” contains a piece of wood from the Calypso’s interior on its case back. For me, the case back is this limited edition’s main draw. I love that you can own a piece of Cousteau’s boat. The watch remains high on my wish list.

In all honesty, I could have picked any watch from A. Lange & Söhne to demonstrate the incredible level of their movement finishing. This German (or, more specifically, Saxon) watchmaker is an absolute master of the display case back, and the Datograph Up/Down “Lumen” is no exception. 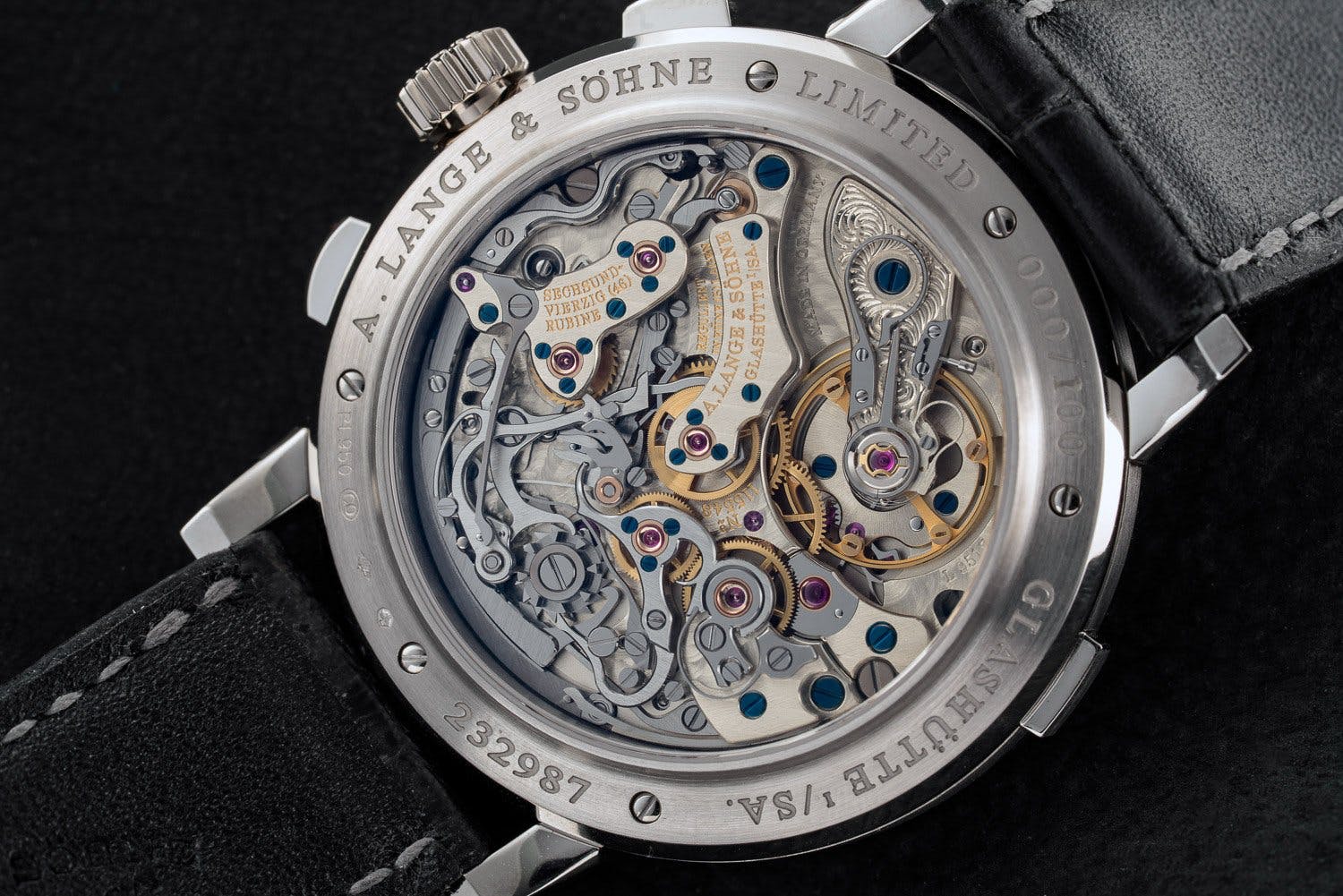 The manual L951.7 movement is made up of 454 components and is an absolute feast for the eyes. Not only does it boast an impressive number of individual parts, but the finishing of each component is also breathtaking. If you can afford a watch by A. Lange & Söhne, you will have a truly spectacular timepiece that will wow you from both sides.

These are just a few examples of the amazing case backs out there. If you’re interested in watches, dive deeper into the world of case backs. Sometimes, the story on the back of a watch is just as powerful as the one told on the front.

What makes the next generation of watch lovers tick?

Why is the IWC Big Pilot considered an icon among pilot’s watches?